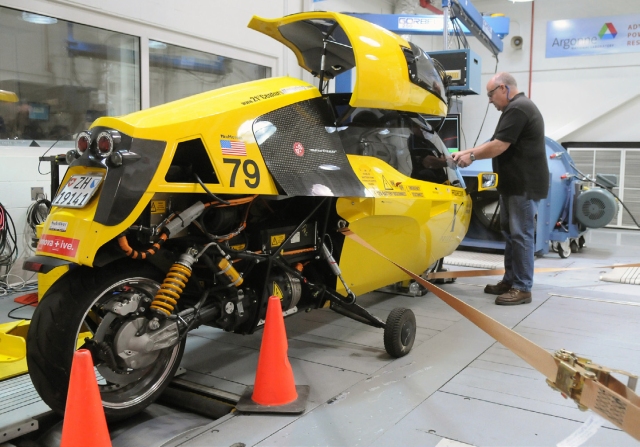 Above, Argonne researcher Geoffrey Amann prepares the E-Tracer 79 for testing at the laboratory’s APRF. In August 2010, APRF researchers provided validation testing for the finalists in Progressive Insurance’s Automotive X Prize Competition to determine they met the competition’s goals for performance and efficiency targets. (Courtesy of Argonne National Laboratory)

I was picked up by Felix flying his A340-200 into Chicago and enjoyed a very smooth ride home to Switzerland today.  I spent the last week in “Government Quarantine” at Argonne National Laboratory.  The two E-Tracers passed all the foregoing tech inpections and all the dyno tests with ease, including the quite tough 15-minute run at 55 mph on a 4% grade, something you hardly do in real life.  Even though we have been the only EV in the competition without battery cooling or even venting, the results were astonishing: With E-Tracer #79 the grade test started with a very warm battery at 35,6 deg C (from charging outside in a tent, ANL did not want Li-Ion vehicles to be charged OR stored inside due to a fire 10 (yes, ten) years ago…).    There was NO cold soaking of vehicles before testing, not what I expected from a National Lab.  After the grade test, where #79 ran at about 14,1 kW or about 0,7C constant current, the battery was at 36,5 deg C, so less than 1,0 deg C warmer.

After strapping E-Tracer #72 for the final time on the dyno for its grade test, I just had to go out of the test cell for a break.  I just couldn’t take it anymore, 15 minutes seem like hours when you can hear that baby of yours scream inside.  Finally, they called me back in and everybody smiled and congratulations followed from all the X PRIZE staff and the ANL crew.  I can’t believe it…we’ve really done it!

What started 3 years ago with a blown clutch on my 1100cc-BMW-powered Ecomobile (on my drive back home to Switzerland from Brno racetrack in 2007, after beating everybody else there and with the Championship Cup in my luggage compartement, I shifted down instead of up at over 160 km/h…dahhh!) really ended with creating the world’s most efficient road-legal and production-ready, electric powered high-performance two-seater.  It’s going to be official after the 16th of September.  I am so glad I don’t have to brag about that fact myself anymore, don’t have to missionary around telling people the E-Tracer uses three times less energy for the same performance and interior space as a famous electric sports car.

Maybe the world is finally ready for the cabin motorcycle now, after all these years…
-Roger